One of the greatest challenges when it comes to design steel stack structures such as chimneys, is to deal with oscillating loads as dynamic wind forces and seismic spectrum, as commented in this article. These loads threaten the design with coupling the excitation with its natural frequency, leading the structure to failure through resonance due to the high stresses produced by the oscillation amplitude.

Two main strategies can be followed to address this issue: either increasing the natural mode of the structure or damping its response to the excitation.

The objective of the first way (natural mode improvement) is to run away from the dangerous resonance frequencies.

This can be achieved by geometrical changes on the design such as plate thickness enhancement or a gain of chimney’s diameter, or by the addition of new structural elements as stiffeners or supports. Although this method is conceptually simple and does not require an extra designing effort other than adding some more material, is has other limitations. Usually, geometrical changes as wider diameter or the addition of new elements are restricted by other features of the whole project. 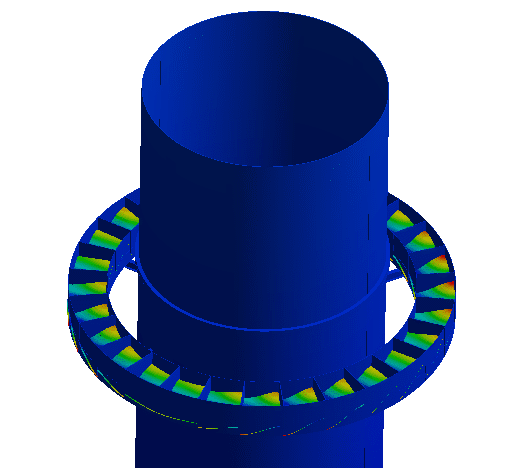 Neighbour structures limiting the available volume or chimney’s exhaust properties are examples of these limitations. Other inconvenience for this solution, and the one who uses to have the last word, is the cost-efficiency. An increment on plate’s thickness involve a not negligible increment on the project’s expense moving it away further than the structure’s natural mode.

The other path to follow in order to guard the structure against oscillations is dramatically increasing the structure’s damping by the addition of a damping system.

Even though there are different methods to achieve this, this article will be focused on the tuned liquid dampers (TLD).

The mission of the TLD is to dissipate the energy absorbed by the structure from oscillating loads, through a mass-spring-damper equivalent system that moves desynchronized with the chimney at its natural frequency.

It is, in essence, a series of pools connected to the structure that moves against its pendulum movement. The phenomenon responsible of the energy mitigation effect inside the pools is called sloshing, and is defined as the movement of liquid inside another object. An example of sloshing familiar to almost everyone can be seen every time you walk with a soup plate.

The human gait frequency (acting as the excitation) is close to the plate mode, so each step amplifies the soup’s wave motion, finally causing it to ruin your menu by splitting out of the rim. 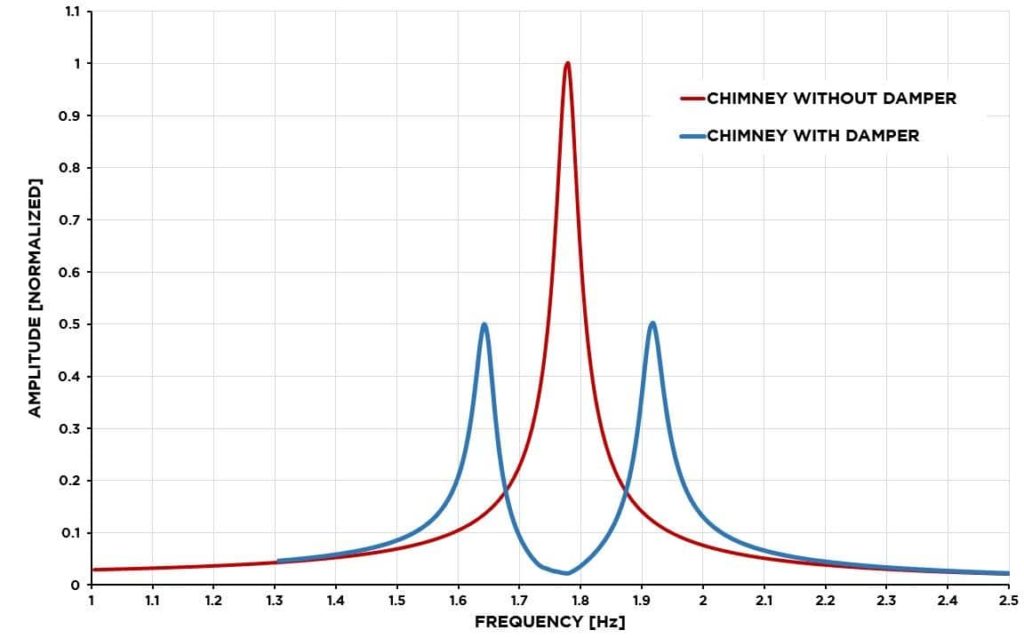 On the other hand, if you are carrying a cup of coffee at a standard walking speed, despite it creates waves on the surface, the excitation frequency remains lower that the coffee’s natural mode, and as long as you don’t speed up, you breakfast will be safe. 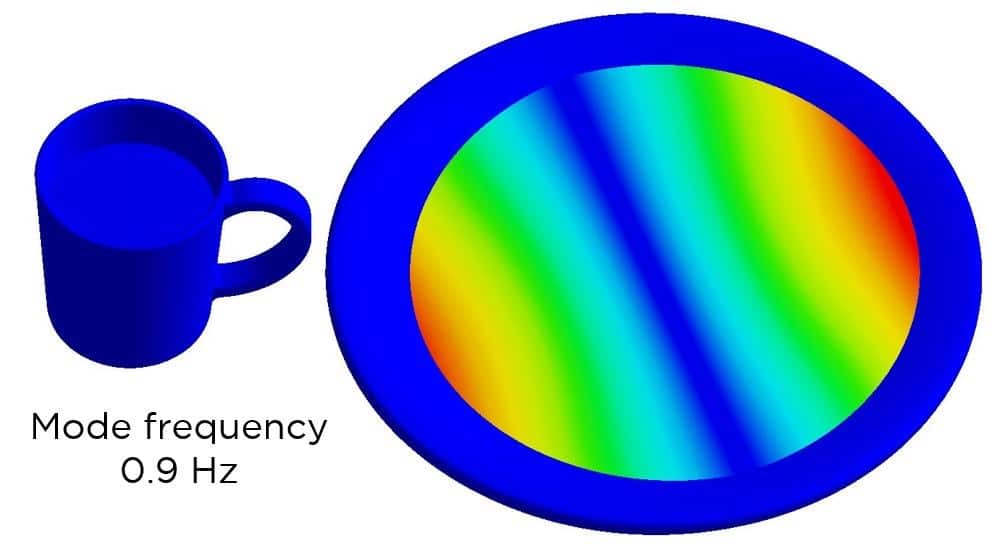 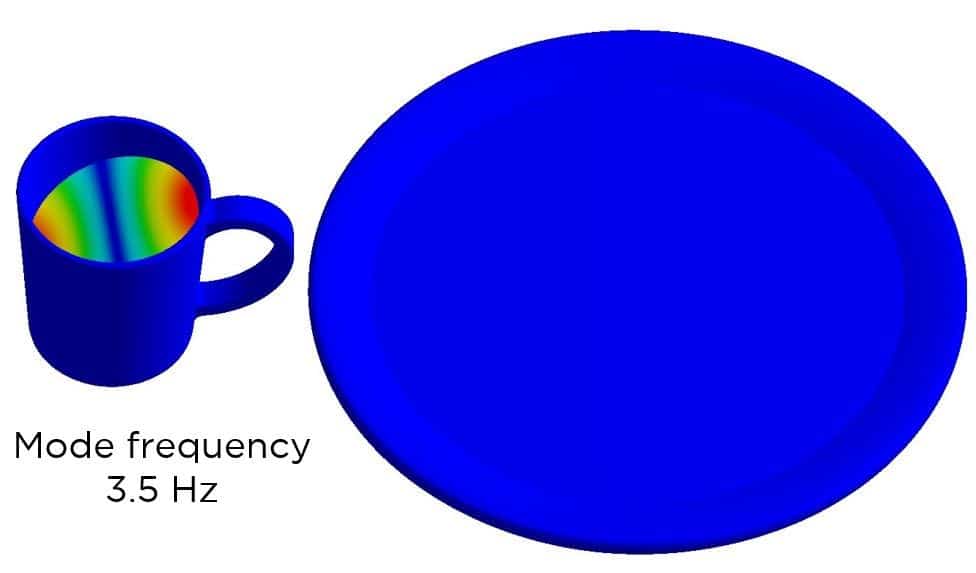 The parameters that define geometrically a TLD, controlling its behaviour, are its interior [Rint] and exterior radius [Rext], the number of pools in which the TLD is divided, and the liquid height [H] that controls the liquid volume and thus the liquid mass. This liquid mass is divided in two distinguishable masses: the impulsive mass, the one that moves creating the sloshing phenomenon, and the convective mass, that has no relative movement with the TLD. Note that despite it has its influence on the sloshing frequency, the amount of convective mass also acts as dead load on the chimney, moving its natural frequency, so it has to be taken into consideration when tuning the assembly.

The interior radius is used as the start point to calculate the previously mentioned variables [as it is more or less set by the chimneys geometry itself] along with the chimneys natural frequency and modal mass, acting as the focus result for the tune and as a reference for the total liquid mass respectively. Then, using the linear wave theory and the Graham & Rodríguez equations, the first group of parameters is obtained. Because of the influence of the TLD’s convective mass on the base chimney’s natural mode, an interpolation process has to be performed in order to obtain a fine tuning for the liquid damper. 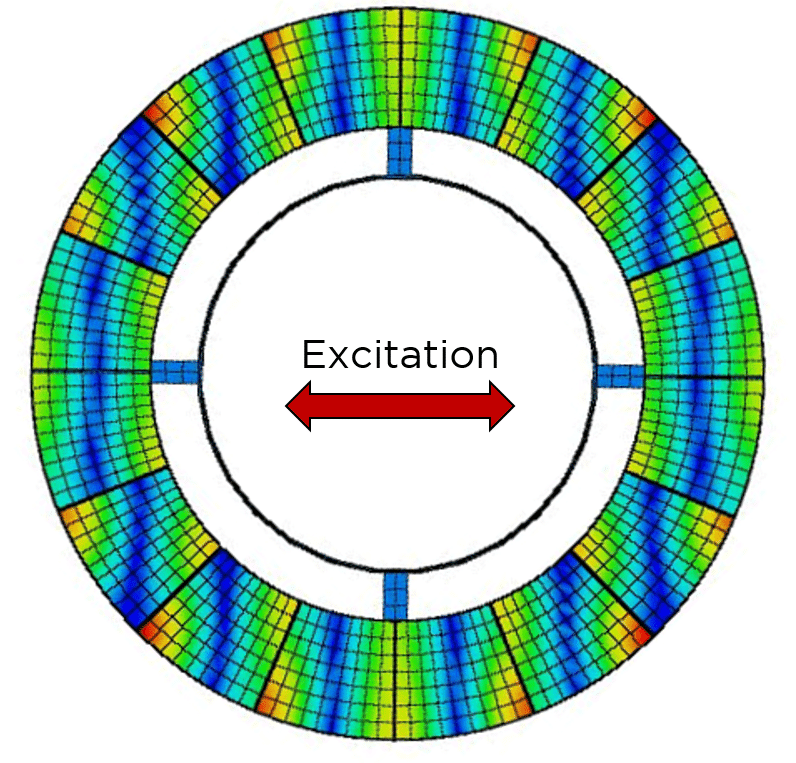 To optimize this method’s accuracy and asses its results, SDEA’s advanced engineering team assembled a coupled FEA modal analysis plus harmonic response computational model. A fluid-structure interaction model along with a fluid free surface boundary condition is needed to capture the sloshing effect on the TLD’s pools. The next image shows the pools from a TLD where it can be appreciated that the liquid from all pools move in the same direction when they get coupled with the chimney’s response to external excitation.

Although this solution for the problem introduced in this article has a bigger technical load than enhancing the structure plate’s thickness, the cost-efficiency and adaptability of the damper installation compensate these cons by relieving the projects budget and providing certain design flexibility to overcome hypothetical installation issues. 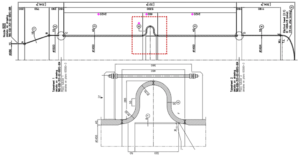